Codo #10 was a new house for us as our previous apartment had been rented for the season and we were coming for just the month of March. It is a narrow traditional house on a small, mostly commercial street, within a short walk to all our favourite activities. There is a full kitchen and a large two-story tall large living-dining room on the main floor, a good sized bedroom and bathroom on the mezzanine level and another large bedroom and bath on the top floor. In addition, a roof terrace with a laundry area opens from the bedroom. We liked the house so much that we quickly reserved it for next year.

The first Friday in March brings the dancers, called concheros, celebrating the Festival of El Señor de la Conquista (Lord of the Conquest) to the steets surrounding the Jardin (Park) in front of the famous pink stone church, the Parroquia. According to oral history, the indigenous Tarascan people from Michoacan sculpted two human-sized Christs made of corn cane paste in the late 1500s. One was for the village of San Felipe, Guanajuato, and the second was for San Miguel de Allende. In 1585 the friars carrying the statues were attacked and murdered in the area known as Puente del Fraile by Chichimeca natives hostile to Christianity. Later, evangelized Chichimecas found the pieces of the statues. Now, the sculpture of the Lord of the Conquest made for San Miguel is the only known statue. This statue is kept in a chapel inside the Parroquia. The dancers come to the Jardin in the morning from parishes in smaller towns in the area. Each parish establishes their area on the streets around the Jardin, often surrounding a collection of burning sweet grass and native artifacts. They dance to the beating of drums from 10AM to 8 PM, each group taking turns to parade into the Parroquia for mass. It is a must see for me and I take lots of photos every year. This year was no different. The pre-hispanic outfits were elaborate and the dancers in fine form. 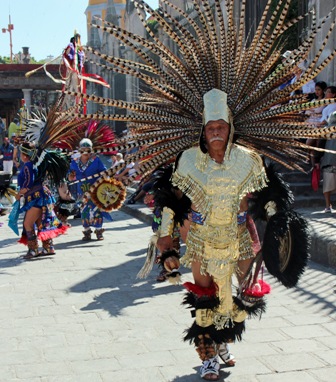 Click the photo above to see an album of Conchero dancers. Close the window to return to this page.

Friday is the weekly lunch at Oso Azul where the food is light and good and the music provided by a good Mexican woman who sings and plays the guitar. The only problem is the poor lady has to compete with our non-stop talking.

My mornings, Monday through Friday, start at 9 AM at the Posada de la Aldea, a colonial era  building just a short walk from our place. Monday, Wednesday and Friday I attend the popular Yoga with Alejandro, held in a large meeting room in the hotel. Tuesday and Thursday is water aerobics, led by the effervescent Erendira in the hotel’s outdoor pool. Ray uses that time to explore more of San Miguel town, finding new, interesting side streets all the time.

We buy the Atencion every Friday and choose the most interesting plays and discussion offered at the Biblioteca (library) or concerts at Angela Peralta Theater. Friday or Sunday at 5 PM finds us at St Paul’s Anglican Church to listen to the Pro Musica offerings of a classical concert preformed by guest musicians from the US and Europe. Pro Musica’s end of the season concert is a special event for us. Held in the beautiful backyard of one of the sponsor’s of the event, we sit on either side of a reflection pool and  a concert in a lighter vein, waiting patiently for intermission when champagne and tasty appetizers set us up for the second half of the program.

New to me this year was a contest, sponsored by Pro Musica, to encourage young Mexican opera singers in their chosen career. The 10 finalists, reduced from more than 60 original contestants, entertain the audience with an operatic selection before an intermission, and a second choice afterwards. There are professional experts who must vote for the best performer but the audience is given ballots as well. The winners are awarded cash prizes and contracts. The contestants are so good it was difficult to choose just the three I thought were the best.

Once a year, a semi-professional group offers a week of 10 minute plays at the San Miguel Playhouse. This year there were 7 plays, depicting the 7 deadly sins. They are always well done, usually with a twist in the plot. The audience gets to vote of their personal three favourites and prizes are awarded at the end of the season.

Saturday is the Organic market where I buy fresh vegetables and try out one of the excellent mole sauces to add spice to our home cooked meals. The craft market next to Instituto Allende is also in session Saturdays and Sundays. Margaret Burbidge usually has a necklace that I can’t resist. I now have quite a collection.

Besides the Friday lunch, our group of friends regularly meet to sample new restaurants and celebrate birthday. Barry Mair’s birthday in late March gives us all a chance to share a pot luch meal and a peice of cake, traditionally a carrot cake ordered from a favourite bakery for the occasion. Ray and I invited everyone to come to our house for a 5-7 party. We all had a good visit, sampling the various finger food each person contributed and enjoying a glass of wine did, and even a taste of mescal.

We learned that you have to arrive early for the free concert, “Musica Bajo Los Arboles”, offered occasionally under the trees at the Casa de la Cultura. Seating is limited and the best places in sitting on a rock or a grassy spot are snapped up fast. This year, four musicians, a violinist, David Mendoza, an accordionist, Camille Garcia, bassist, Ruben Olvera and a woman vocalist, Luz Garcia, entertained with Argentinean tango music and French Edith Piaf songs. They were very good.  Towards the end of the performance, a tango number encouraged a couple to dance quite expertly on a terrace in front of where we were seated. We were most appreciative.

With all the activites available to us and so many friends to meet, it is no wonder we keep coming back to San Miguel each March.

To read about the rest of our winter in Mexico and see photos, click one of the following